Baby Conceived to Save Sister's Life 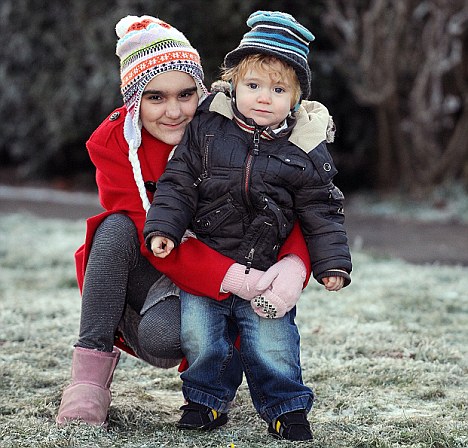 17-month-old Max Matthews is called the UK’s first “savior sibling.” Max was conceived for the express purpose of saving his 9-year-old sister’s life. Blood taken from Max’s umbilical cord and bone marrow was used in a transplant for Megan, who suffers from Fanconi anemia and was not expected to live beyond 7 years old.
As reported by the Daily Mail’s Rachel Ellis, December 22, 2010:

His Christmas present for his big sister has been months in the making. Toddler Max Matthews has given nine-year-old Megan the ultimate gift – a cure for the life-threatening disease she has suffered from since birth. He became the first ‘saviour sibling’ to be created in the UK after doctors cultivated embryos that could provide stem cells to treat Megan’s condition.
Now, blood taken from 17-month-old Max’s umbilical cord and bone marrow has been successfully used in a transplant for Megan…. The £6,000 procedure that led to Max’s birth was paid for by the NHS [National Health Service] as a last chance to help Megan….
Opponents have argued that screening embryos and creating ‘designer’ babies to save a sibling’s life meddles with nature and risks turning children into commodities. But the Matthews family, from King’s Lynn, Norfolk, reject the criticism. Mrs Matthews said: ‘There is no question that we have done the right thing. Max completed our family and gave his sister the chance of a normal life. It has triggered a really special bond between them – they are always together and it is lovely to see.’
Mrs Matthews and husband Andy, 40, a machine operator, decided to try to create a saviour sibling after Megan was diagnosed with Fanconi anaemia Type C when she was three. Her condition was so severe that doctors gave her only four years to live. The disease predisposes sufferers to cancer, leukaemia and kidney problems and causes bone marrow failure, which means any infection can be life-threatening.
Megan’s only chance of a cure was a bone marrow transplant, but checks on her older brother Stuart, 11, who is free of the disease, and the world bone marrow register, failed to find a match.
Mrs Matthews, a former nanny, said: ‘We always wanted three children. The only reason we didn’t have another child after Megan was that there was a one in four chance we could pass the disease on because both me and my husband are carriers.’
The couple underwent IVF, with the £6,000 bill met by the NHS, which decides funding in these circumstances on a case by case basis. The embryos were screened and suitable ones selected using a process called Pre-Implantation Genetic Diagnosis – the first time it has been carried out on British soil. The result was Max, born on July 22 last year.
…since the transplant, Megan has made astonishing progress. She was in hospital for just eight weeks – less than half the time doctors expected – and is doing so well she may be able to stop taking some of her medication early next year….

When Joseph e-mailed me this story, he asked for my reaction. Here are my thoughts:
1. Max did not give his consent to be conceived, born and have his blood harvested. This violates God’s law of Free Will.
2. Max was artificially conceived (IVF) for the express purpose of harvesting his stem cells from his umbilicial cord and bone marrow to aid his sister. This is in violation of philosopher Immanuel Kant’s Categorical Imperative, which states that a fundamental moral principle is that we should treat other people as ends, not means. Other people are not instruments to serve our self-interested ends. But Max was conceived to serve as the means toward his parents’ own end of “saving” their daughter’s life.
3. What happened to the other embryos that were conceived via IVF but not “chosen” to live, as Max was?
4. Why were British taxpayers made to pay for all this? We are not told what the total cost is, but the IVF alone cost UK taxpayers $9,355.80 (£6,000).
I’d be interested in what you think!
~Eowyn

I wrote Eowyn on this as it troubled me deeply, and I needed to sort out my thinking [sentiments], but was too emotional [sentimental] about it. As usual, she was able to cut to the heart of this, and I now understand as follows: 1. The whole matter smacks of experimentation for a private end using public means, therefore NOT acceptable, as ends and means should agree; and 2. the “saviour child” had no say or free will in this mess. No matter how much good will we have for a satisfactory resolution [end] of the afflicted child, the means… Read more »

Might be getting a little away from the topic, but I was doing a bit of research when I came across this very interesting article last summer:
https://pajamasmedia.com/blog/the-pro-life-case-for-stem-cell-treatment/

Tough questions, and glad I am that I don’t have to provide answers to them. I also wonder at how this will affect Max in the long run, will being a savior baby be a burden or a blessing? Will it bless both their lives, or will Megan feel like she always owes Max and will Max wonder if he is valuable in his own right? Children view the world very differently than adults do. A thoughtless comment from an adult is capable of changing a child’s self-perception irrevocably. How many children think their parents’ divorce is their fault? How… Read more »

“How does anyone know that Max didn’t agree to this?”
That is the problem. No one knows. You hope, and assume, that God did ask little Max! But for the rest of us, we are not assured. Even had Max been asked, he has not reached the Age of Reason — a concept recognized by the Catholic Church and our legal system — to sensibly exercise his free will.
Your point about people having kids for all the wrong reasons is thought provoking. How many of us can really claim to be true to Kant’s Categorical Imperative? ….

That particular question is truly one for myself. I was bred by parents who both wanted to be taken care of, had children because it was part of getting married, and wanted all boys. I’m sure you can see the problem right there. I was the second girl. I like to think that God saw what my sister was going through and asked me if I would be willing to help and I said yes. Whether or not that’s true, I do not know. I simply find comfort in believing that I chose this hell because I could make a… Read more »

Thanks for posting about this article. I also feel very sentimental about this sort of thing. I am trying hard to not judge these parents too harshly, it must be terrible to see your child have that kind of illness. But at the same time I believe they must have been blinded by their despair for their daughter. Hopefully the only tissue used from the toddler came from his umbilical cord when he was born. You highlighted in the article the concern over “designer” children becoming commodities. This seems like a very serious moral issue to me, as we already… Read more »