Are we seeing part of President Lucifer's end game?

The following WND article is simply pasted in below. My only embellishment is to say that the subject is so chilling we need to pay attention. ~ TD

by BOB UNRUH
Back in 2008, Barack Obama, then a presidential candidate, called for a “civilian national security force.” And he wanted it wanted it as big as all of the nation’s military branches.
Combined.
Now black activist Al Sharpton is suggesting a path that probably would accomplish that: nationalize America’s police forces.
Sharpton, the National Action Network chief who has been sounding off most of the week on the death in police custody of Freddie Gray, said: “We need the Justice Department to step in and take over policing in this country. In the 20th century, they had to fight states’ rights to get the right to vote. We’re going to have to fight states’ rights in terms of closing down police cases. Police must be held accountable.”
Talk radio host Rush Limbaugh said Friday that Sharpton is “talking about looting the legal system, national takeover of policing.”
Limbaugh said that with the state’s attorney’s announcement Friday of counts against six police officers for the in-custody death of Freddie Gray, justice in America is becoming “social justice.”
“If you’ve heard the term ‘social justice’ bandied about over the course of your life and wondered what it really mean, aside from another way of expressing liberalism, the press conference today by Ms. Mosby, the state attorney, pretty much defines social justice as opposed to real justice,” Limbaugh said.
Get “Police State U.S.A.” and get author Cheryl Chumley’s take on why in 10 years, “Our kids won’t know the America of our youth.”
First, the talk host said, Sharpton talks about a policing takeover, then, “she comes along and starts talking about the cause. One and one equals two. ‘This is a moment, this is your moment,’ What, the charging of six cops? Or the death of Freddie? What is the moment? ‘Let’s ensure that we have peaceful, productive rallies that will develop structural and systemic changes for generations to come. You are at the forefront of this cause, and as young people, our time is now.”
Obama’s calls for a private standing army was made at a 2008 appearance in Colorado Springs.
“We cannot continue to rely only on our military in order to achieve the national security objectives we set,” Obama said at the time. “We’ve got have a civilian national security force that’s just as powerful, just as strong, just as well-funded.”
See the Colorado Springs remarks:
It was WND Editor Joseph Farah who raised the obvious questions about Obama’s plans for a civilian army after the speech.
“For several days now, WND has been hounding Barack Obama’s campaign about a statement he made July 2 in Colorado Springs – a statement that blew my mind, one that has had me scratching my head ever since,” he wrote at the time.
“In talking about his plans to double the size of the Peace Corps and nearly quadruple the size of AmeriCorps and the size of the nation’s military services, he made this rather shocking (and chilling) pledge: ‘We cannot continue to rely on our military in order to achieve the national security objectives we’ve set. We’ve got to have a civilian national security force that’s just as powerful, just as strong, just as well-funded.’”
“Now, since I’ve never heard anyone inside or out of government use the phrase ‘civilian national security force’ before, I was more than a little curious about what he has in mind,” he wrote. “What does it mean?”
Farah pointed out that a “massive but secret national police force that will be even bigger than the Army, Navy, Marines and Air Force put together” would be startling.
“The U.S. Army alone has nearly 500,000 troops. That doesn’t count reserves or National Guard. In 2007, the U.S. Defense budget was $439 billion. Is Obama serious about creating some kind of domestic security force bigger and more expensive than that?” he wrote.
Limbaugh explained what the nationalization of police and the “social justice” emphasis by the prosecutor, mean.
“I think the legal system – what Rev. Sharpton meant here in the first sound bite, I’m gonna go ahead and say this. What Rev. Sharpton is talking about is looting the legal system. When he talks about a national takeover of policing in this country, he’s talking about looting the legal system.”
WND reported two years ago that a book documented how the Department of Homeland Security already was demonstrating troubling signs the agency is shifting the balance of power away from local and state municipalities toward a centralized federal authority.
In “Impeachable Offenses: The Case to Remove Barack Obama from Office,” New York Times bestselling authors Aaron Klein and Brenda J. Elliott conclude the DHS has likely violated the Posse Comitatus Act.
The law expressly forbids direct participation by the military in a “search, seizure, arrest, or other similar activity.”
The authors further cite evidence the DHS is building a de facto domestic military, with the purchase of military-grade equipment and the execution of military-style training exercises.
Aaron Klein’s “Impeachable Offenses: The Case to Remove Barack Obama from Office” is available now, autographed, at WND’s Superstore
The DHS could be the realization of Obama’s call for a civilian national security force, warn Klein and Elliott.
https://www.wnd.com/2015/05/obamas-national-civilian-security-force-endorsed/

Now we know why Obama’s agent provocateurs are stirring up protests in our other major cities.
♞

“Now we know why Obama’s agent provocateurs are stirring up protests in our other major cities.”
And Soros, too.
Chilling post, TD!

Don’t think it has no basis in history to include trained youth: “AmeriCorps, Paramilitary Obama Youth Corps (TSA, FEMA, Homeland Security) is not without precedence. Patriotism has historically been a chief means for manipulation, control of populations why would Amerika be any different. If you require examples look at the dictatorships in Africa, Latin and South America. What of Mao – March of the Revolutionary Youth: a Cultural Revolution song, Pol Pot do to his nations youth. The Soviet Union had their Young Pioneers while Der Fuhrer, with the love of a father, groomed his Hitler Jugend.” ~Excerpt from Parallel… Read more »

Great points! It’s always that pattern. Build your revolutionary army with the hearts and minds of the children. It is amazing how quickly an 8 year old boy becomes an 18 year old soldier. A ten year window is all you need.

Truly DEEPLY troubling article. Police from coast to coast should be up in arms over the actions of Lucifer, Sharpton, soros. etc
I was always under the impression his civilian army would be made up of millions of illegal lah-tee-nose and his chillins from Somalia. Haiti and every other 3rd world hellhole he has promised “free everything for life, just get here”

I know what you mean, and am hoping our recent victories are enough for now. But what troubles me is how quickly John Boehner’s mask came off after the last election, how quickly he threw conservatives under the bus.

I know what you mean traildust, Boehner is a political windsock. He can’t be trusted to have any resolve on anything.

You would think that would be the natural progression, but somehow BO has found a way to side step most every other rule and law so far, including just plain ignoring. A few years ago, I was poking around government jobs out of curiosity. I went under Army jobs and there was an opening for guards for relocation camps. I sat there stunned for a few minutes, trying to digest it, then quietly backed out and never went back. Jarret has recently bragged they have so much more to do to us and I believe it, I just wish we… Read more »

Wow Glenn!! Guards for “relocation camps” sounds very creepy, I would have backed out of there in a hurry too!! You are right, I was thinking in terms of a normally functioning government but since BO nothing functions as it should….including congress. ?

Glenn47,
“A few years ago, I was poking around government jobs out of curiosity. I went under Army jobs and there was an opening for guards for relocation camps.”
If you ever see that again, please send me the URL or take a screenshot of the job notice!

Exactly how does Homeland Security formed by Pres. Bush connect with FEMA formed by Pres. Carter. There is a connection that I do not understand. Do any of you understand the sliding sands of time.
Bonnie Parvino

Now I know why obama’s administration has been stockpiling bullets.
It’s getting easier and easier for the govt to convince people to give up their best interests and rights in the name of “national security”.

Mom, sometimes I think the stockpiling so much ammo from so many depts. That have absolutely zero use for them, is to keep the ammo out of the hands of the citizens.

If Sharpton truly believed in “accountability” he would pay his taxes.

What if I told you that Sharpton and Limbaugh both work for the same Masters? Yes, Sharpton makes a living shooting off his big mouth, and he’s a gadfly without a point. But he’s a corporate spokesman—Obama’s spokesman, but a spokesman to a system just the same. Ditto Limbaugh. This Bush Machine blimp is just as deceptive as Sharpton—even more so—because, Yes, you can learn things from him. But Rush Limbaugh is, at the end of the day, just like Sharpton: Each man always remembers who cuts him his paycheck. Don’t you get it by now? We’re living under a… Read more »

“in order to achieve the national security objectives we’ve set”…… Has anyone ever spelled out exactly what those “objectives” are? A larger fence around the Executive Mansion but no barriers on our southern border with Mexico? More felons released from prisons? More felons allowed unimpeded entry to the nation? More ‘immigrants’ from muslim countries? More black gangs roaming the streets participating in ‘knockout games’ against unarmed innocent white people (Oh, my…. did I say the words ‘innocent’ and ‘white’ in the same sentence? It’s well known that the only ‘innocent’ people in the US are of the ‘black persuasion’…..)? More… Read more »

When folks realize USGOV is staging fake terrorist attacks (and school shootings), they may revolt.
That is why the gov’t is rushing to disarm the population. 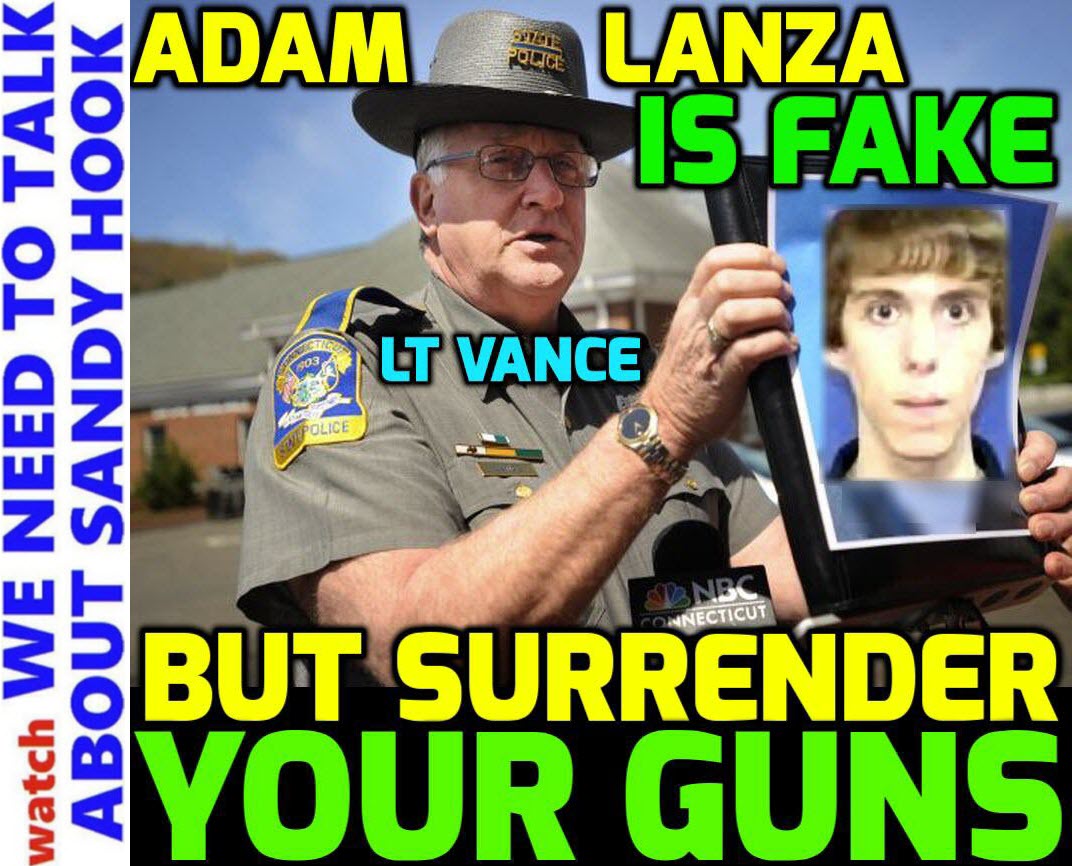 They screwed up at Sandy Hook (gun-grab hoax). The clock is ticking — we’re in a race to wake folks up before the Globalists (via traitor Congress) outlaw private gun ownership.