This time, it’s in China.
The UK’s Daily Mail reports, July 2, 2012, that a drunk bus driver in southeastern China’s city of Wenzhou, was caught on camera gnawing at a woman’s face in a horrific random attack.
According to local news reports, the driver, named Dong, had been drinking heavily during lunch with his friends before the outburst. Suddenly he ran onto a road and stood in front of the car being driven by a woman named Du, stopping her from moving. Dong climbed on and started beating the car’s hood while the panicked woman screamed for help. When she left the car and tried to escape, Dong leaped on top of her, wrestled her to the ground, and started biting her face. The poor woman was covered in blood and weeping as passers-by tried to pull the crazed man off her.

Witnesses said that the bus driver had gone “crazy” and was successfully resisting attempts to subdue him. When police arrived, they managed to take Dong into custody, bringing his rampage to an end.
Du was taken to hospital, where doctors said she would need plastic surgery to repair her nose and lips.
This incident is the latest in a series of cannibalist horrors. The most notorious of which was the awful attack on a Miami causeway of a homeless man by a naked and growling Rudy Eugene, who chewed off most of the face of his victim before he was shot to death by police.
At the time, Miami police and emergency room physicians had said a new type of lethal synthetic drug sold as “bath salts” might have triggered Eugene’s psychosis. (For more on these evil “bath salts,” see my post, “‘Bath salts’ turn people into zombies.”) But the toxicology report on Eugene specifically ruled out “bath salts”. The only drug found in Eugene’s system was marijuana.
There seems to be no rational explanation for this outbreak of psychotic cannibalism. I’m normally not conspiratorial-minded, but turn to conspiracy theories only as a last resort. But I’m finding myself more and more wondering about a curious “educational” graphic novel published last year by the U.S. federal government’s Centers for Disease Control and Prevention (CDC) in March, 2011.
Presented as a “ha ha” tongue-in-cheek spoof, the graphic novel is titled Preparedness 101: Zombie Pandemic. 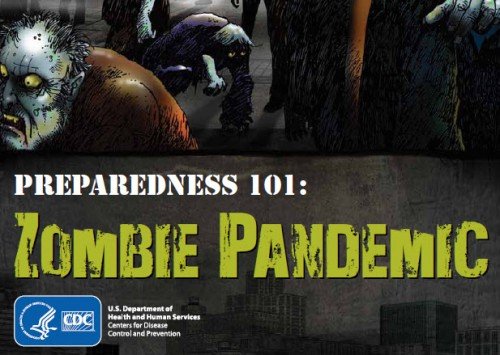 This is the CDC’s description of Zombie Pandemic:
CDC has a fun new way of teaching about emergency preparedness. Our new graphic novel, “Preparedness 101: Zombie Pandemic” demonstrates the importance of being prepared in an entertaining way that people of all ages will enjoy. Readers follow Todd, Julie, and their dog Max as a strange new disease begins spreading, turning ordinary people into zombies. Stick around to the end for a surprising twist that will drive home the importance of being prepared for any emergency. Included in the novel is a Preparedness Checklist so that readers can get their family, workplace, or school ready before disaster strikes. Click on the image below to view the novella. A transcript can be found by clicking on the “accessible text” PDF. To order your own copy of the novella click here.
You can read also the comic on the CDC’s website.
In the graphic novel, a “zombie pandemic” has taken place in the southeast of the United States. Hmmm, the incidents of Rudy Eugene and Brandon De Leon were in Miami; that of Carl Jacquneaux took place in Lafayette Parish in Louisiana — all in the United State’ southeastern region!
As Vigilant Citizen notes, while the CDC insists the comic is meant to be an “entertaining way to learn about emergency preparedness”, it does feature a rather odd choice of disease. Here’s a sample from Zombie Pandemic: 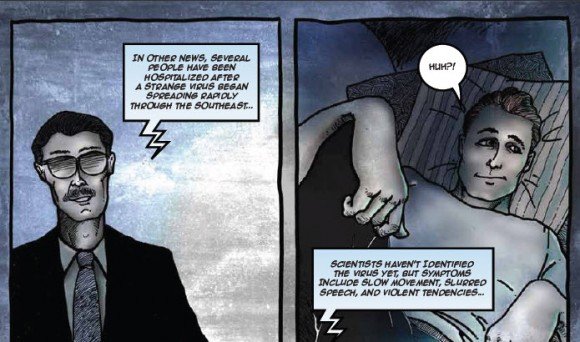 The way to deal with the zombie pandemic is, of course, mass vaccination. By the way, the movie “Contagion” was funded by the CDC.
~Eowyn

‘mass vaccination’…hmmmmm….that’s your first clue.
https://experimentalvaccines.org/
for myself, i am going w/ demonic possession. Alcohol & drugs open the spiritual door to demons. these are the End of Times, & this is the last effort of the evil one to destroy souls before Christ’s return.
I just stitched blessed salts into my scapular.
https://www.spiritdaily.com/climateswervejune2012.htm

These drug companies & vaccine makers are killing people.
GlaxoSmithKline Pleads Guilty, Fined $3 Billion In Largest Health Care Fraud Settlement In U.S. History
https://www.infiniteunknown.net/2012/07/02/glaxosmithkline-pleads-guilty-fined-3-billion-in-largest-health-care-fraud-settlement-in-u-s-history/?utm_source=feedburner&utm_medium=feed&utm_campaign=Feed%3A+InfiniteUnknown+%28Infinite+Unknown%29
“Prosecutors say GSK encouraged use of Paxil for children although it was not approved for anyone under 18. The company also promoted Wellbutrin for uses besides major depressive disorder, its only approved use. They say that between 2001 and 2007 GSK failed to report on two studies of the cardiovascular safety of Avandia, a diabetes drug.”

Totally agree with you thelittlebrother.
Dr. E. I am somewhat into the conspiracy thing. Let’s just say I have an open mind about it. Maybe spend too much time on Alex Jones site. LOL

Di dyou all know about the attack we had here in San Antonio? yup, here as well. And don’t think that I am not carrying, because I am, legally of course. This is some really disturbing stuff,and it can’t be blamed on bath salts anymore. The news said the Miami guy had only one drug in his blood and that was a little marijuana, and that there were no adultered substances present.

Are you talking about the man that started eating his dog?

By the way, just an observation regarding the CDC preparedness 101 , Zombie Pandemic PDF. Do the powers that be feel that we are so far gone, intellectually, that we must be taught how to prepare by reading a comic book style manual on preparedness? I know they have been trying to dumb us down for years; but this is beyond ridiculous. We can all still read I hope, or is it that they think we must be entertained like little kids who have a short attention span?

…unless, of course, DHS is going to declare all those “right-wing extremist” old people, veterans and other conservatives to be zombies.

There’s a hot video game called “Zombie Apocalypse.” Don’t know if it’s funded by the CDC or served as inspiration for the CDC preparedness campaign.

Reblogged this on Laura iancu's Blog.