The stories the MSM and demorats do not want you to hear. Proof: CNN and MSNBC cut away from Trump’s event with the “Angel Families.”
One illegal alien who killed a young woman came here illegally as an unaccompanied minor. He remains a fugitive for murder.
One illegal alien killed a young man on a motorcycle while he was driving drunk. The young man (Matthew) was thrown from the motorcycle and initially survived the crash. The illegal alien ran over Matthew and dragged him a quarter mile while people were screaming at him to stop. The victim was dislodged from the illegal’s vehicle yet he backed up over his victim and fled, leaving Matthew to die. He was sentenced for only 12-14 years.
The last woman to speak to Laura Ingraham (when the video was cutoff) had some choice words for Kathy Griffin, who tweeted that President Trump was using the Angel Moms as propaganda. From Fox News:
“Sabine Durden, a legal immigrant from Germany, said her son Dominic was killed in 2012 when a truck slammed into his motorcycle. The truck’s driver, Juan Zacarias Tzun, was an illegal alien with two felonies and two DUIs, Durden has said.
“[Griffin] needs to go [to] a stage somewhere in little back alley and entertain the two people that are still following her,” Durden said on “The Ingraham Angle.”
“She just has no grounds. She has no soul. She has no heart. And I pray to God she never knows this feeling.”
Durden added that her son’s killer was jailed for just 35 days.”
DCG

But they love illegal aliens and open borders… 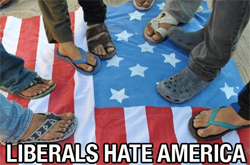 Democrats (and their media allies) suck.

Policies and procedures established and followed by previous administrations without notice are brief and required for the good and safety of all concerned. Okay?

First it is the immigrants settling into the country your previous generations had built and handed over to you to keep productive and safe. Then come those immigrants – onto your own property. By then, it’s too late, supposedly “because they ‘outvote’ you”. Your own people by then do not have the iron-will and the weaponery that it will take to stop both – the invading “immigrants” and the governmental forces – which now are arrayed to provide full support to the immigrants. “Dawson’s three daughters were visiting him for the weekend. Chanti and her younger sister went out on… Read more »

DAMN!! No WONDER the Democrats (as a Domestic Terrorist Organization-I mean,as a GROUP) are pushing so hard for “comprehensive gun legislation” (Gun Control)!! If I was supporting these CRIMINAL efforts to destroy America,I sure as hell wouldn’t want 300 million pissed off gun owners outside MY door!!!

Their words will be their fall,another reason to shut down the fake ,,msm,,news