ManBearPig is blowing more hot air to promote his sequel to An Inconvenient Truth.
From Hollywood Reporter: “Every night on the news is like a nature hike through the Book of Revelation,” Al Gore said Saturday night when asked his opinion of how the news media reports on climate change. “And I’ll wait for the newscasters to connect the dots,” he continued, adding that they rarely do.
Gore spoke about the state of the news media and its effect on the conversation surrounding global climate change at a Q&A before an advance screening of his his latest documentary, An Inconvenient Sequel: Truth to Power, held at the Greek Theatre in Los Angeles.
At the Fandango-sponsored event, actor Joseph Gordon-Levitt moderated the conversation with the former vice president of the United States, asking about “fake news” and its place in the denialist narrative about climate change.
“We have a challenge in the U.S., where climate in the news in concerned,” said Gore. “First: The line between news and entertainment has become a very porous line.” He added: “Second reason is that there is a pretty powerful and wealthy special interest of carbon polluters that have spent billions of dollars over the past three decades putting out false information.”
Gordon-Levitt asked Gore where he gets his own news. “I like to triangulate,” said Gore, adding his go-tos are The New York Times, The Guardian and The Wall Street Journal, adding, “I’ll read some red-state sites, as well.”
An Inconvenient Sequel, from directors Bonni Cohen and Jon Shenk, is the follow-up to Davis Guggenheim’s Oscar-winning 2006 doc An Inconvenient Truth. The Participant-produced sequel, which premiered at this year’s Sundance Film Festival, will be released July 28 by Paramount.
Before the screening began, Gore prompted the audience to go to town-hall meetings, talk to their local representatives and do their own research on the global climate crisis. He concluded: “It has to come from the people because the news media is not giving it to us fairly and squarely now.”
DCG
Please follow and like us:

Reblogged this on necltr and commented:
An Inconvenient Truth: Deceptions for More Power?

Thanks, Al… we’ll keep an eye out for Manbearpig. 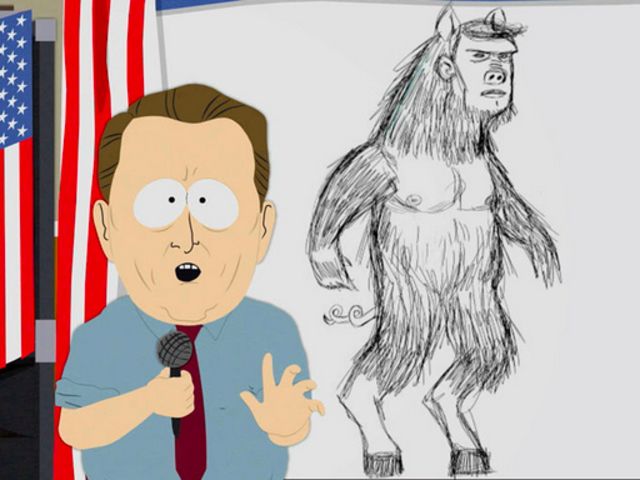 This fat ass doesn’t get it, yeah, there is a climate change in the White House and it is Donald Trump. Hey Al, Stephen Hawkin’s has a non return ticket to somewhere in the galaxy, be the first one there!

Al Gore must have received another $multi-millions bribe from George Soros to push his global warming crap, AGAIN.
https://dailycaller.com/2016/08/17/soros-paid-al-gore-millions-to-push-aggressive-us-action-on-global-warming/

And he was almost a US president.

What, Gore the Whore didn’t make enough money the first time around with his fake documentary, much of it stolen?
Evidence is not on his side and he needs to hang it up. He has made a massive fool of himself and any intelligent person ignores him.
As for Soros, I think his time is limited, thank goodness, and he needs to spend the remainder behind bars for all the carnage his has financed.

Bible scholar Al should have read 21:1 of Revelation then he would know what God has planned for this earth; Revelation 21:1
“And I saw a new heaven and a new earth: for the first heaven and the first earth were passed away; and there was no more sea.”
Amen.

Al Gorey reads Revelation? Wow. He should check out Genesis 8:22 as well:
“While the earth remaineth, seedtime and harvest, and cold and heat, and summer and winter, and day and night shall not cease.”

“because the news media is not giving it to us fairly and squarely now.”
Even the liberal news media won’t jump on his bandwagon?
It’s pretty bad when even they won’t support you stupid ideas.

Headline from the Daily Mail UK… Hmm, why does whether to exit the Paris Climate Change Act need to be “weighed”? Trump campaigned on having no part of it, so just do it, Mr. President, don’t send your kid around wasting time “listening” about it. 5/8/17: “Ivanka is going on a ‘listening tour’ of top government officials – as she helps decide whether to ditch climate change deal: –Ivanka Trump is spending the next two weeks getting to know top officials at cabinet agencies across the sprawling federal government; –She begins with the Environmental Protection Agency, a department that would… Read more »

Ivanka is going on the listening tour to gather information, IMO. Nothing is a done deal yet. The art of the deal is always in effect. I will await the outcome of this tour.

Remember when Ivanka Met Al back on 12/5/16 to discuss this same topic! How many pow-wows do these people need to have over the same subject?

What qualifications does Ivanka have with which to make critical assessments of anything she “listens to” regarding climate change? What’s to prevent Trump from getting an earful from Ivanka regarding all the “beautiful plants, animals, land, and island dwellers” who are going to DIE if something drastic isn’t done to curtail human activity and thus prevent climate change? And then he’ll make his decision FOR such changes to please dear Ivanka… not unlike how he formed his decision to go into Syria.

What qualifications does Al Gore have with which to make critical assessments related to climate change?

BTW, funny how the left has tried to co-opt the phrase “fake news” as if the problem is from the right putting out news the left disagrees with… and apparently, it’s all backed by Mother Russia at that! Fake news is just that; it’s not truthful, it’s not fact; it’s rather opinion and persuasive drivel intended to alter perception, even to try and change historical records so they can then point back and say, “see, we told you it was always this way!” And with reports on Trump, it’s words out of context, and often nothing more than lies he… Read more »