After weeks of running, dog found a sanctuary at Texas church

Get your hankies out ’cause you’ll need it.

Laura Simpson reports for Care2.com, April 10, 2012, on a heart-rending rescue by Kelle Mann Davis, 54, the big-hearted founder of an animal rescue charity in Houston, Texas — Forgotten Dogs of the 5th Ward.

Davis was drawn to the 5th Ward because in that area of Houston, hard economic times have led to widespread abandonment and neglect of pets. So she turned to friends and colleagues on Facebook and posed the simple questions, “Will anyone help?”

The response nearly knocked Kelle down. With a major kick-off donation of more than $10,000 from the Harmony Fund international animal rescue charity, Kelle was able to form the all-volunteer Forgotten Dogs of the 5th Ward.

This is the story of one of Kelle’s most recent rescues, a dog named River.

“River” is a white and brindle young male who had been on the streets for many weeks. Every time Kelle saw him, he was running.

“It seemed to me, he was trying to find his way home,” Kelle explains. “I saw him four times in six weeks, always in different places, miles away from the last. I had numerous calls, emails and texts from others who had seen him too. No one could get near him. Everyone was concerned.”

In his restless daily runs through the busy city of Houston, the dog began crossing Interstate 59, a briskly traveled four lane highway. Kelle feared that he’d be killed before she could catch him:

“I had seen such changes in him over those weeks on the run. His once-white fur was becoming more and more dingy and now he was limping and losing weight, skin sagging. I think he may have been hit by a car. I started looking for his body on the side of the road. It seemed impossible that he could survive the many miles of busy streets and highways that he was traveling. But the tips of his whereabouts just kept coming in. Every couple of days, I’d get word of his location and each time I would say a prayer of thanks that he was still alive and I would ask for a miracle that somehow we could help him.”

And then one day it happened.

The dog stopped running. After crossing hundreds of streets and backyards, parking lots and alleys, he finally found a place where he felt safe — at the River of God Church.

That’s when Kelle named him “River.”

The pastor and congregation were pleased to allow River to stay on the property. Two other dogs, abandoned at the church months earlier and now living there as permanent pets, made fast friends with the wanderer and they began to comfort one another. Each day a man name Faustino, who lives at the church, would offer food and water and attempt to get a little closer to River. And although River would not let anyone touch him, he evidently felt safe in the church.

After a few days of searching for a foster home, a volunteer from Pals for Pooches agreed to take the dog in. And all that was left was bringing him into custody. Kelle baited a large humane trap with “some juicy steak and smelly cat food” and within 45 minutes, she had him. She loaded the cage into her car and headed down the road.

“When we got to the veterinarian, it was very important to me to get River on a leash and to lead him in like a loved and cared for pet,” Kelle said. “It took me about five minutes to convince him to come out, with leashes around his neck, and he jumped out and allowed me to stroke him. I always wonder how long since these dogs have been touched with love, and with each one, that is very important to me to do before they head off to the next step of their journey of love.”

“River walked in, shaking, but with head held high. I spent about 15 minutes in his kennel there with him, reassuring him that he was safe, and petting him. This one I left with tears in my eyes. It has been a unique journey and I never thought I would see the day he was safe.” 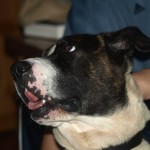 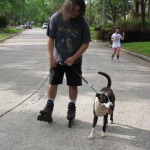 Going for a run with a member of his foster family. 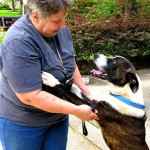 River is no longer afraid and jumps on his foster family for attention. His confidence is back!

River is in good health and now joining his new foster family where his “dad” will be taking him for daily runs alongside his bicycle or rollerblades. He finds that the exercise is a great stress reliever for dogs like River and the outings instill a sense of trust and belonging. And River is just one of many who are finding their way again with the help of the Forgotten Dogs of the 5th Ward.

“We have had two dogs who needed amputations, another with a severely embedded wire in his neck, several with heartworm, gunshot wounds and broken bones,” Kelle explains. “So sad is the plight of the forgotten, but I am so very honored and privileged to be able to help. I know deep down in my soul is that I am supposed to be doing this. I rely daily on divine guidance and am assured that those that need us will be placed in front of us, and we won’t turn our backs on them.”

See more incredible and heartwarming photos of the dogs rescued by Kelle and the other volunteers at Forgotten Dogs of the 5th Ward.

Kelle Mann Davis crouching down to attend to another pup in need.

God bless you, Kelle Mann Davis. There’s a special place in Heaven for you.

Please consider donating to Forgotten Dogs of the 5th Ward, no matter how small. Click here. I wouldn’t ask you if I hadn’t made one. 🙂

This reminds me of Mother Theresa’s care of the most neglected….

Indeed! Kelle is compassionate and truly kind! She sees God in each of these little creatures that she tends to so lovingly.

Thank you Dr. Eowyn for this beautiful post. Praise God that River is now being loved and cared for by kind people.