Priorities.
From NY Post: Mayor Bill de Blasio on Thursday skipped an NYPD swearing-in ceremony made somber by this week’s assassination of a cop — then hours later revealed he was busy preparing to jet off on a surprise trip to join leftist protesters at the G-20 summit in Germany.
Hizzoner’s overseas jaunt was kept under wraps until just 90 minutes before he took off from Newark Airport. A last-minute announcement said he “will attend several events surrounding the G-20 Summit, including Saturday’s Hamburg Zeigt Haltung rally.”
De Blasio will be the keynote speaker, organizers of the demonstration — Hamburg Shows Attitude — tweeted.
The mayor also made sure the free trip will include a visit with his son, Dante, a Yale University student who’s spending the summer on an internship in Berlin, a City Hall spokesman said.
Presumptive Republican challenger Nicole Malliotakis accused de Blasio of abandoning pressing issues in the Big Apple to pursue his progressive agenda in Europe. “Unbelievable. Instead of jet-setting around the world, he should be here doing his job,” said the Staten Island assemblywoman. “A police officer was murdered, street homelessness has skyrocketed and people continue to get delayed on the trains.”
Malliotakis — who later tweeted a doctored image showing de Blasio in an Alpine hat and lederhosen, grinning behind a plate of bratwurst, wienerschnitzel and Pilsner glasses — also blasted him for blowing off the NYPD ceremony at the Police Academy in Queens.
“The mayor should be embarrassed by the way he has treated the men and women of our police department,” she said.
The head of the NYPD sergeants union also attacked de Blasio. “As the city mourns, its leader flees,” Ed Mullins said. “And then he wonders why he has a problem with the police. A real leader stays with the city in this time of hardship.”
Less than five hours before de Blasio’s flight to Berlin, NYPD Commissioner James O’Neill offered reassurance to 524 new recruits in the wake of Wednesday’s slaying of Officer Miosotis Familia.
The 12-year veteran and mom of three was shot in the back of the head by cop-hating ex-con Alexander Bonds, who opened fire through the window of a mobile command center vehicle.
O’Neill told the recruits he was sure many family members “are questioning whether you’re making the right decision, especially after yesterday’s tragedy in the Bronx.”
“I’m here to tell you, you are making the right decision,” he insisted.
Asked why de Blasio — who spent the day holed up at Gracie Mansion — didn’t join O’Neill to help rally the recruits, spokesman Eric Phillips replied: “Scheduling conflicts.”
O’Neill later offered his condolences to Familia’s 12-year-old twins, Delilah and Peter, during a visit to their home in the Bronx. “There are so many young officers that have never been through this before and for the next couple of days it’s going to be very difficult for them and for the family, too,” he said.
De Blasio was joined on the trip by Phillips and two other aides, whose travel expenses are also being picked up by Hamburg Shows Attitude.
Phillips said the gifts were approved in advance by the city Conflicts of Interest Board, whose general counsel said it was “prohibited by law from disclosing any information regarding advice we provide.”
In October, de Blasio told a class of NYPD recruits, “We honor you for making this choice,” before adding that “what we owe to you is every effort to keep you safe.”
Following Familia’s slaying, her sister, Adriana Sanchez, ripped de Blasio, saying that “the mayor has to do something for this madness to stop,” and that windows on NYPD vehicles should have been made bulletproof “a long time ago.”
Later Thursday, following de Blasio’s departure, City Hall announced a $1.3 million plan to outfit “all NYPD command vehicles used by uniform personnel” with bullet-resistant window panels and other safety upgrades.
The city had already earmarked $10.4 million for window panels in 38,000 patrol vehicles, with 151 equipped as of Wednesday, according to the NYPD.
DCG

Has this POS fulfilled even one of his duties? He always seems to have conflicting schedules going on. Such disrespect to the officers, but this isn’t the first time. They turned their backs on him before, as they should have. He has let the city down time and again and from what I have seen and heard, made no improvements anywhere. He should be removed for dereliction of duty, but I would guess his pockets will be full if he leaves. He has always seemed totally disconnected to what his job should be. And who in the heck is Hamburg… Read more »

Glenn47 . . . Bravo! I could not agree more. He is like so many leftists . . . when they get to the top, they scarf everything they can possibly get, after all it’s free! He should man up and avoid even the appearance of impropriety on his part. He sickens me .. . I do hope that the people of NYC will vote in the Republican that is running.

DeBlasio… always jacking everything up.

Sadly, according to,the news, Phil died from the fall.

Start Impeachment proceedings against him NOW! (Hey-if they can start impeachment against Trump without a crime to impeach FOR,it’s only fair to Impeach Deblousyo for the stuff he IS doing wrong…..

This is a first: A government official (NY mayor) of a capitalist country (USA) joining the G20 anti-capitalist anarchist protest. Anarchists, by definition, are anti all governments.
When De Blasio gets there, the 15,000-strong German police should arrest him, just as they’ve already arrested at least 70 protesters.
https://www.theguardian.com/world/2017/jul/07/g20-protests-hamburg-altona-messehalle

Amen to that sentiment. Why would this bone-head think he needs to travel the world protesting Trump . . . stay at home AND CLEAN YOUR OWN FRONT PORCH STEP! The fact that he did not appear at the memorial for the slain NYC police office is beyond the pale.

Meanwhile, at the G20 summit riotfest…

Hey, don’t let him back into the country. Maybe he can go to Yemen, or…….Ghana.

Thank You, DCG, for posting this article. This Mayor, operating under his nom de guerre, William “Bill” Deblasio, has a real name, Warren Wilhelm. This tips me off AT THE GET-GO that he is possessed of a strong communistic attitude, for the first thing communists do is operate under pseudonyms. (Lenin, Stalin, Trotsky, et al., all had real names, not the names history calls them). So the next step is to identify, what, if any, real connections he has. And, YES, this IS a case that calls for guilt by association: We must find out WHO this man—clearly a total… Read more »

So-a DeBlasio (Italian?) is actually a WILHELM (German?)-A Feminist might deduce he’s a Woman,since he can “multi-task”,change his political allegiance,change his name and change his nationality all at once.
But with all this talent,he STILL has that GOOFY FACE. No wonder he’s so twisted….

Warren Wilhelm is his birth name. He changed his name to William de Blasio, after his mother’s Italian family name because his parents split when he was 7 and he was largely brought up by his mother’s family.
https://en.wikipedia.org/wiki/Bill_de_Blasio#Early_life_and_education
It’s been observed that many on the Left have a fractured psychology because of childhood/family traumas. De Blasio is an example. Doesn’t excuse what he chose to become, of course.

Dr. E.
I could be wrong, but I think he changed his name from Warren Wilhelm (Jewish father) to Bill Wilhelm while in college and then finally to Bill DeBlasio when he got into politics. (My memory of the timeline may be off.)
Also, it doesn’t necessarily follow that because his mother was Italian that she (or Wilhelm’s) upbringing was Christian.

He may be changing it to “Sparky the Pinhead” after this latest episode.

TJ, I don’t think,even he knows what he is. He married a long time black lesbian woman and had two children with her.

It would have been great if they had stopped and ID’d as many rioters as they could get their hands on and if they were from out of country or without ID, have them cool their heels off in jail for several days. A cold, dark, miserable jail. Don’t bother to send them home, let them find their own way. I would bet a large number were from the US and maybe even DeBlasio is in on it. Keep him also.

We could have had a “Free Willy” movement. “Squeal like a pig…….Reeeee!”.

You know who is probably still crying? These babies. De Blasio is facing major backlash. His role as a mayor is to provide leadership and attend ceremonial duties. His role includes addressing his local citizen’s concerns: homelessness, crime, the crappy subway system that is breaking down, etc. This does not include attending some global riot/protest to feed his TDS. He is to provide leadership when the community is under stress, as in the case of one of their police being assassinated. His skipping out on the NYPD at a time when they are under extreme stress does not set a… Read more »

Not to mention as you point out, ceremonial duties such as attending a slain police officer’s funeral are a part of de Blasio’s job as mayor. It is not his job to join a violent protest in Germany.

Indeed, like him or not, he represents the city. If he had any sense of decency he’d do his job. Of course, he doesn’t. Just another NWO tool.

I think he will just be a one term Mayor for some of the reasons you’ve mentioned…..
The homeless situation is kind of hopeless I don’t think any Mayor can solve that problem unless they subsidizes rent……

I’m against G-20, too. But Dr. E. is right: This JERK didn’t even go to the hospital to pay his respects! I said Deblasio can go to hell, and I mean it. But here’s the clincher: WHAT will the PBA do? I’m waiting on your response, P.B.A. leader Lynch.
Deblasio MUST NOT be allowed to be re-elected.

He should remove the log from his own eye……

He’s just got to help loot the Apple Store and Mickey D’s.

One of my favorite TV shows is Blue Bloods. It makes me feel that there are still some noble people in control. The show’s writers often create episodes that spring from news headlines like these. So I am looking forward to a story line about a murdered female cop and a treasonous mayor. Let’s see if this happens.

I personally don’t care what freakin’ Holy Wood does or does not put into story lines, EXCEPT for the fact that the CIA and other intelligence agencies often WRITE or TELL the scriptwriters what story lines to pursue, what to include, what not to include, how the story should end, etc.

NYC deserves who they elect. I feel bad for the conservative minority, but no one is forcing them to stay there. They ought to vote with their feet if so outnumbered by Progressive idiots (but, I repeat myself) that their voting becomes futile.

Author
DCG
Reply to  David B.

I feel bad for all citizens of NYC, the NYC council members, the NYPD, and the children of Familia, that the good mayor didn’t even have the decency to stay there.
Hopefully they will vote smarter next time. Sigh…

You get what you vote for. 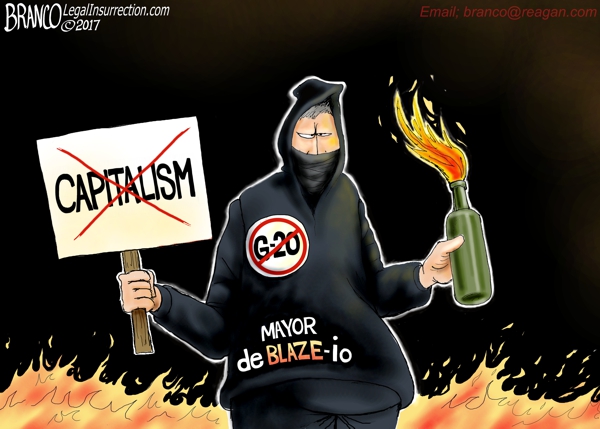 Reblogged this on necltr and commented:
This happens when one appeals to a voting bloc while seeking a position not a part of the present city, county, state, or national structure.

I did not know you had it so bad over there. We have our problems here but reading the above it was disgusting. The Far Left, bunch of damn hypocrites cause nothing but trouble, take a look around Europe its nothing but Marxist thugs. Nothing knew about jaunting off for freebies the Taxpayers have picked up the bill for. I hope that Republican Challenger will end up Mayor.