Aetna ditching 70% of its ObamaCare business

Via NY Post: Insurance giant Aetna won’t be offering coverage under ObamaCare next year in 11 of the 15 states it now serves — an announcement that instantly became an issue in the presidential race.
Aetna’s decision led Donald Trump to charge that President Obama’s health care reform was “imploding.” “Aetna’s decision to leave the Affordable Care Act’s public marketplaces is the latest blow to this broken law that is slowly imploding under its regulatory red tape,” said Trump campaign deputy national policy director Dan Kowalski.
“Millions of Americans have lost their health coverage under this disastrous policy, eliminating their ability to choose their doctors. Thousands of businesses have been forced to cut employment or shutter their doors in response to Obama’s signature achievement,” he added.
The company had previously warned that it expected to lose more than $300 million this year on the 900,000 patients it covers under the Affordable Care Act. Aetna said it is pulling out of ObamaCare markets in Arizona, Florida, Georgia, Illinois, Kentucky, Missouri, North Carolina, Ohio, Pennsylvania, South Carolina and Texas.
Aetna does not currently offer the policies in New York. It does offer other medical insurance to individuals and small businesses as well as large employers in the state, officials said. It will continue to offer policies in Delaware, Iowa, Nebraska and Virginia.
ObamaCare is credited with expanding coverage to millions of previously uninsured or under-insured people.

But insurers have complained they have lost money on the policies. United Health Group and Humana are other insurers exiting ObamaCare plans.
Aetna CEO Mark Bertolini, in a statement, said there were not enough younger, healthier customers signing up to make ObamaCare policies sustainable. “The vast majority of payers have experienced continued financial stress within their individual public exchange business. Providing affordable, high-quality health care options to consumers is not possible without a balanced risk pool,” Bertolini said.
More than a dozen nonprofit insurance co-ops have shut down in the past couple years. The pullouts could spell trouble because competition is supposed to help control price increases.
Some states like Alaska and Oklahoma will be left with only one insurer selling ObamaCare plans to individuals in 2017. More densely populated states like New York say their ObamaCare markets remain strong.
But rates for customers are skyrocketing to maintain stability.

The delusion is strong with them, unfortunately…

The Justice Department should have let Aetna merge with Humana. Fewer insurance companies will lead to lower premiums.

Maybe in THIS instance,but in a Free Market System,it’s MORE stores that bring premiums down-more competition for the consumer’s patronage and money. This is,of course,assuming price-fixing is not tolerated.

Any time you have a guaranteed buyer the price goes up. I remember the mandatory auto insurance. At the time it was an outrage. Now people are used to it. The idea of government dictating what citizens did with their money was unconscionable.
Before, the companies competed by lowering rates. Afterward, all the rates went up.

Remember when ,if you wanted to drive,there was what is called “assumed risk”? If I drove,I was assuming liability for my own damages,whether I was at fault or not. I was FINE with that-it made ALL drivers more cautious,and more courteous. Insurance was available if you felt you needed it,but it was an option. Once it was made MANDATORY,and personal responsibility was removed from the scene,people were essentially “allowed” to drive like idiots and analorifices. Run into another car at an uncontrolled intersection? No problem-you have INSURANCE for JUST that situation. And,as you just said,once every driver was required by… Read more »

“Assumed risk”…I’m glad this was mentioned. I remember when CA started requiring insurance to drive. I got stuck with “assigned risk”, because I was a new-ish driver and was in a “sports car” (Ha! A ’71 Fiat Spyder, while sporty, was hardly a “sports car”.). The insurance cost my parents a fortune, just as my son’s insurance now costs US a fortune. I wondered what people did before insurance; one lapse in judgment or error in maneuvering and everything could be taken from you. I certainly couldn’t afford to make someone “whole” whose life I ruined accidentally. “Assumed risk” explains… Read more »

Yes, I am opposed to ALL of these laws. That doesn’t mean that I don’t think its a good idea to have insurance. The thing is, it should be MY idea, not the government’s. In my lifetime I have seen countless examples of this, large and small. What many fail to realize is that “government” is a growth business. They are ALWAYS looking for new business. Every time some knucklehead has an “issue” he whines to government and they go “hot damn” and run off to draft a law (and pick up a neat pile from the lobbyists involved). We… Read more »

“The thing is, it should be MY idea, not the government’s. ”
just like speed limits,motorcycle helmet use and owning/carrying a gun. NONE of this is the Government’s business. If one of us causes injury to an innocent due to one of these issues,THEN hold us accountable-we would DESERVE it. But Government’s job is NOT to punish Americans for injury that hasn’t happened yet.

They couldn’t allow that to get in the way of their goal – single-payer healthcare.

Just another way that the elite can squeeze on, and control those of us who are in the middle class. This was a ghastly idea from the get go, and the longer we go down the road, the worse the plan gets.

Y’all best be gittin’ ready fer Single Payer*, ‘cuz we is almost thar.
*May as well start capitalizing it now and beat the rush.

Yeah, they’ll be dredging up your internet history to see if you live or die

And God help you if you ever voted for a conservative. 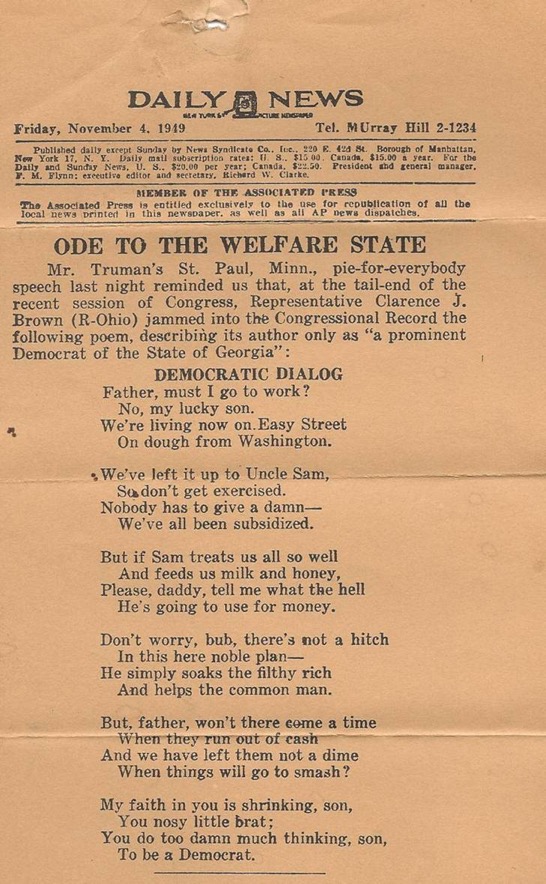 Obamacare was designed to fail, so the Congress could institute a single-payer system. The (hopefully) future President Trump had better learn the lesson here, and understand that every single government program is, and can only be—thanks to demographics multiplied by inflation and dollar devaluation—A PONZI SCHEME. Now we’re at the point where we WON’T BE ABLE to pass the buck to the next generation: The world’s currencies themselves will collapse, most likely before 2040. A President Trump had better level with the American Public and instruct it that the days of wine and roses are OVER, and he had better… Read more »

Exactly so. Someone once said “the last act of any failed empire is to loot the treasury”. Then they’ll do “single payer” and start again.

I knew when it offered zero discounts for people who could demonstrate that they live a healthy life style, that it was doomed to failure! The only people to benefit would be the Pharmaceutical Companies could continue to sell their overpriced poisons to the suckers!

Many doctors told them way back when this would happen, but no one wanted to believe it. Those looking forward to a free ride, didn’t care one twit that the hard working middle class would feel it the most. The same people denied their COLA raise three years running. A pox on them all.