This news carries the headline “Teacher fired after ‘third graders had oral sex in classroom under a table’.”
What I find odd is that the emphasis is on the teacher getting fired instead of on what it says about American society when 9-year-old kids are having sex — and having it in public, in a classroom.
Christine Show reports for the UK’s Daily Mail, March 22, 2012, that a teacher at the Tallulah Elementary School in Louisiana was fired for being inside a classroom where two third grade students were allegedly having oral sex under a table. 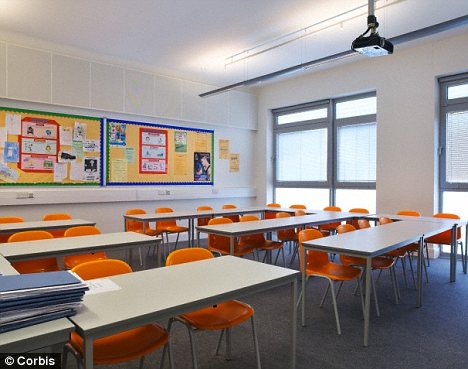 Lisa Wilmore, superintendent of the Madison Parish School District, told The News-Star that the female teacher, whose name was not released, was fired because school leaders determined that she was not doing enough to appropriately watch over the class. Wilmore said: “We have to make sure we have people in these classrooms who are monitoring our students.”
The firing is part of an undertaking by Wilmore to improve the culture of the school, which has struggled academically. Another teacher in the same school district, at Madison Parish High School, has been placed on leave with pay pending the results of an investigation into possible substance abuse by the (unnamed) teacher while on the job. Wilmore said she has been working with the district school board to take staff conduct and student achievement issues more seriously. As part of the effort, a second teacher within the district has been put on paid leave this week surrounding allegations of substance abuse on the job.
Madison Parish School District has one of the poorest rankings in Louisiana for its performance score. It ranks 59 out of 62 districts on the list, which is based on drop outs, attendance and overall student achievement.
Wilmore said the two students involved in the sexual act were given counseling.

This is what I found on Tallulah Elementary School (TES):

Image of school on Google Maps

Located in Tallulah, Louisiana, TES serves grades PK-5 in the Madison Parish School District. Based on its state test results, it has received a GreatSchools Rating of a meager 2 out of 10. Here’s the ethnic make-up of TES students:

95% of the students at TES are eligible for free or reduced-price lunch program.
Superintendent Lisa Wilmore:

This is just another reason to shut down the school system as we know it and start over. You can’t make idiots do a good job. The school systems are completely dysfunctional and they are uninspiring to most kids. It really is more of a prison system, to make sure “no child is left behind”, in other words, they want to make sure that each and every child grows up to be a moron. This whole business of stripping the child away from the family at such an early age needs to be reexamined. Schools are nothing more than state… Read more »

Al, been saying and emailing that for years. Kill the NEA. We all know it is and will continue to be ‘indoctrination’ and never education. It was on display for one recent national example with this Fluke fiasco. I’m a BBoomer and many of my generation continue to pull out the few hair we have left every time we hear one of these mushbrains regurgitating what they consider to be ‘intelligence’ on what is the latest ‘we are owed it so give it to us’ meme of the current culture.

Proright The whole mess should go, not just the NEA. In this case you have to throw the baby out with the bathwater because it is Rosemary’s baby. The school system insures low moral character, under-performance and lack of ambition. Sure, some kids do well in spite of it, but overall, the whole school system as we know it needs to be flushed down the toilet. We need stronger families. I suggest that young men learn to do careers where they can support a family on just one income and get married at a younger age while they still have… Read more »

They may not be able to read and write, but that sex ed is sure showing results…

9 year olds? I thought children didn’t do those sort of things…

Sieg,
There’s a very troubling development in the United States (and probably worldwide): Precocious puberty, i.e., puberty that starts before age 8 in a girl or 9 in a boy. There are racial differences: black children enter into puberty much earlier than other races.

I heard of a black woman who was 32 and her oldest kid was 21! Indicating she gave birth at 11, and likely got pregnant at 10!
Also I heard that it’s NOT Uncommon for black girls to not even have their first period because they’re SO sexually active SO early, they get pregnant before they’re able to have that first period.

Sorry for the typo of “even,” my smartphone is so annoying.

Used-to not… still had 14-yr-old-girls get pregnant and drop out of jr. high, scares me to think what they do now.

Reblogged this on News You May Have Missed.

Get rid of every freeking Lib there is in this country.

Sadly to say, our younger two got quite an education watching the news during that time period.

I remember when our older son was in middle school (he is 32 now), and he would come home and tell me how kids were doing oral sex in the back of the bus. I started picking them up at thet point.

Thank you Dr. Eowyn for this information, though sickening, it is the truth which we must know! I agree with Sage – home schooling is the answer! If I had children to educate today, that is what i would do, no question in my mind.